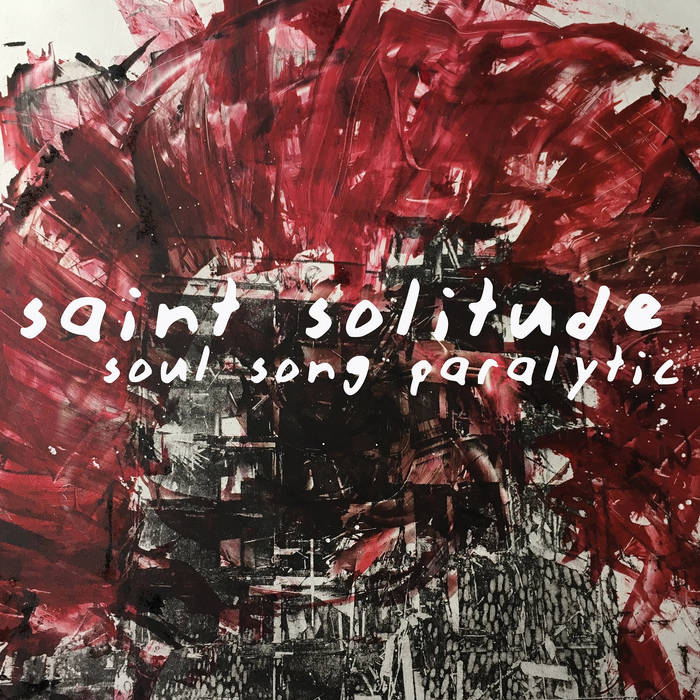 Inspired by the loss of very close friends and family, Soul Song Paralytic is a musical-visual collaboration that brings together the musician Dup Crosson (Saint Solitude) and the visual artist Dara Lorenzo for a unique project exploring “grief, death, and other favorites."

"Drawing from and sublimating our personal losses into a complete musical album and visual exhibit, we hope to create a shared public space where mourning and all its facets can be on display with pride. We intend for these pieces to stand in stark contrast to a culture that shuns discussions about death, often fails to provide adequate tools for healing, and rewards individuals who rush through mourning or neglect it altogether. In the process, we hope to connect with those in mourning and encourage similar creative means of expressing the brutal emotional experiences found in loss.”

Saint Solitude’s contribution to the exhibit is its fifth full-length album, comprised of 12 songs that confront the minutiae of grieving and extrapolates Crosson’s personal experience to a broader paradigm: the single dream of a deceased friend turns into a question of how the dead define the living; the uniquely painful process of delivering a eulogy focuses instead on amassing an inventory of fond memories.

Crosson has persistently self-branded himself to be a songwriter in the pop realm (except Flux Camoufleurs, his flagrantly 2015 experimental collection of instrumentals). On SSP, though, these tendencies take a backseat to jagged rhythms, odd meters, and a conspicuous use of space. An idea of controlled chaos dominates the album’s mood with longer, darker, and stranger songs. Arrangements on cuts like “The Second Arrow” and “Plain Sight” draw more from late 90s trip hop than the project’s typical Sunny Day Real Estate and Radiohead comparisons, though splices of accessibility shine through on the lead single “Your Radio Silence” and the twinkling piano leads of “Egypt,” a song first written by Crosson’s friend Andy Campbell for whom the album was written.

Defiant in its efforts to be both vulnerable and aggressive, Soul Song Paralytic is an investigation into a paradox. What results is an album that, despite brooding deeply on the uncomfortable nexus of death, anxiety, and mortality, is full of life.

mixed by Jose Ayerve at Mobile Womb, except tracks 7/10 by Andrew Schatzberg at Landslide Studio and 1/12 by Dup Crosson at Stumble Abode. mastered by Mark Alan Miller at Sonelab. art by Dara Lorenzo, layout by Dup Crosson.

for Andy, captive in lavender.

Depending on the day, or the song, Crosson alternates between the roles of loop artist, multi-instrumentalist, and perhaps most importantly, songwriter. He combines his favorite elements of Britpop, shoegaze, post-punk, and psychedelia into accessible and immediately appealing pop songs hereby known as BITTERSWEET FUZZ. ... more

Bandcamp Daily  your guide to the world of Bandcamp

Guest hosted by Tamar Osbourn aka Collocutor and Toshio Matsuura.